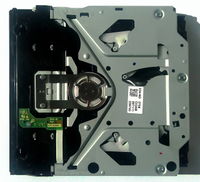 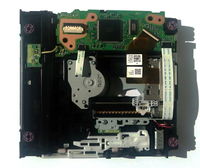 The drive is connected to the Wii U via a normal SATA controller, using AHCI 1.2. The IOSU may communicate with the controller (and, by extension, the drive). The drive identifies as a standard SATAPI disk drive, connected to port 0. In vWii mode, the AHCI controller is placed into a special compatibility mode, which causes it to emulate the Wii's DI and provide accurate backwards-compatibility for Wii software.

Despite using normal SATAPI formatting for its commands (ATA PACKET, etc.), the Wii U disc drive doesn't appear to implement any of the required SCSI commands except for REQUEST SENSE. Instead, an entirely custom set of commands is used. All CDBs appear to be 12 bytes long.

The disc drive uses a two-stage authentication handshake, first a simple CBC-MAC challenge-response authentication so the console can prove it possesses the correct drive key, and then a function to derive a shared session key. The session key is used to decrypt some response data from the drive, using AES-128-CBC with a null IV.