From WiiUBrew
Revision as of 13:36, 9 July 2016 by CreeperMario (talk | contribs) (I created the page, some of which is copy-paste from the readme file. I also uploaded a screenshot, controls and set up a link to the Homebrew App Store page.)
(diff) ← Older revision | Latest revision (diff) | Newer revision → (diff)
Jump to navigation Jump to search

Ast-U-Roids is a simple Wii U homebrew game, in which you control a spaceship (triangle) and destroy the surrounding asteroids. This game is more sophisticated than it looks, featuring air physics and splitting asteroids. 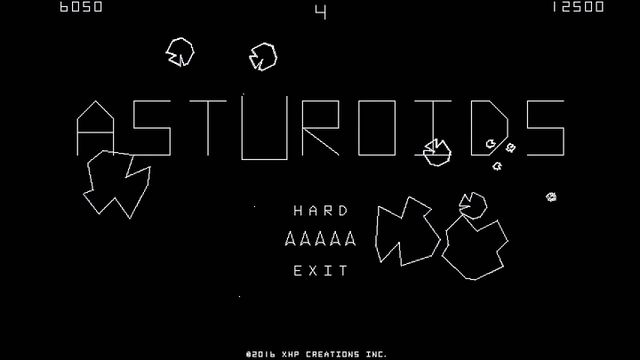 I put a lot of work into this. I built a custom vector library that draws shapes from lines. It also slightly emulates the look and feel of an actual arcade game that uses a vector monitor, and it has a glowing effect that is subtle yet noticeable. Instead of using the full resolution of the DRC and TV, the graphics are about a 1.6 ratio, slightly more than a 4/3 screen, yet slightly less than a 16/9 screen. I did not draw the borders, because it looked tacky, and you can "feel" the limits of the screen after you've played a while. I mainly did this to be closer to the actual resolution of the arcade version, and also so your shots can hit every corner of the screen, yet not completely wrap around to your ship when shooting directly north or south.

As far as gameplay goes, it plays as close to the original as possible. You use the left-stick to turn your ship, and press the B button for your thrust. The thrust will vary depending on how long you hold the button down like the original game. You get 20 points for a big asteroid, 50 for a medium one, and 100 for a small one. You have 5 shots, which are shot as fast as you can press the A button. You don't hold it down, it's tapped like the original. Once those 5 shots are on the screen, you can't shoot any more until one of them is no longer active, plus a slight delay, just like the original. I haven't played in a while, but I think I got all of this pretty close. Also, when a level starts, you will not appear until there are no asteroids in your path, if you are starting a new level while still alive, and an asteroid appears over you, you will slightly blink instead of not appearing like the beginning of the game or after you die. During this time, you can move, but can not shoot until you are clear and have turned solid. I have now added the asteroids breaking apart when you run into them with your ship. You get no points for the asteroid if you run into it. You can press either the X or Y button to use hyper-space. Like in the original, it will randomly place you somewhere else on the screen. On NORMAL difficulty, you get an extra ship every 10,000 points, like the original. Your score is shown in the top left, along with the number of ships you have left. In the top middle, your level number is shown, and on the top right, the amount of points left until you get another life, or on the menu screen, the number of points needed for each ship, depending on the difficulty level you have selected on the menu. Pressing the MINUS button will open up the options menu. You use the D-PAD to navigate. UP/DOWN changes between the difficulty, number of lives, and exit/giveup menus. LEFT/RIGHT increases or decreases each of the top two settings. Use the PLUS button with exit selected on the options menu on the main menu, to exit out of the whole game and go back to the Wii U system menu. Use the PLUS button with giveup selected on the options menu on the pause screen, to quit your current game and go back to the main menu. The difficulty choices are EASY, NORMAL, HARD, and INSANE. I tried to make NORMAL as close to the original as possible. You start with 3 big asteroids on EASY, 4 big asteroids on NORMAL, 5 big asteroids on HARD, and 6 big asteroids on INSANE. The speed of the asteroids range from 1/2 speed for EASY to 2x speed for INSANE. You get a free ship every 7,500 points for EASY up to every 15,000 points for INSANE. Each level you complete, the speed of the asteroids will increase by 1 percent of the current factor. Just as in the game, each asteroid has a random speed, depending on size. The big asteroids are the slowest, and the small asteroids are the fastest. Each new level, an extra big asteroid is added, until you reach the max of 10 big asteroids. You can pause the game at any time with the PLUS button or the MINUS button, which also brings up the options menu. You also use the PLUS button to start each new game after you've set your options, just make sure you do not have exit selected.