Homebrew App Store allows the user to download, manage, and update homebrew apps for Wii U directly to their SD card. It is similar / inspired by Homebrew Browser. The standalone app has no central repo, and requires a repo to be set up in order for it to be used properly.

Check out the video here. 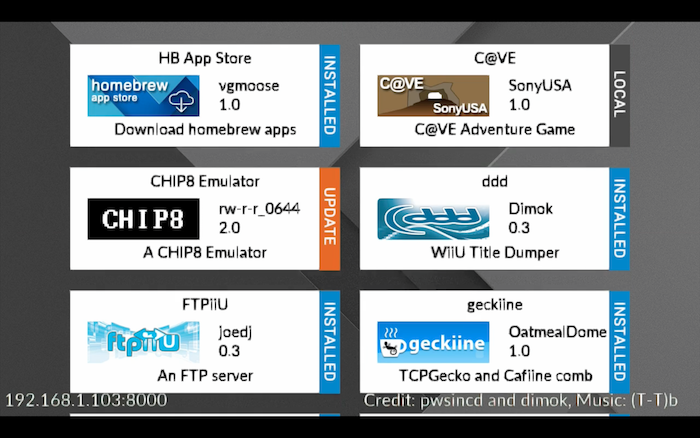 Homebrew App Store allows you to download homebrew apps for HBL directly in the app. Installed apps can also be reinstalled, updated, or deleted. It is an attempt at a poor man's Cydia for Wii U!

To use it, put the downloaded app bundle in /wiiu/apps/appstore, and launch it via HBL.

Apps featured within HBAS are made by other homebrew developers. If anyone takes an issue with their work being distributed in this manner, contact the respective repository owner.

Although "store" is in the name, the apps within are all free-- If a specific homebrew developer wants to charge for their app, they would have to do so outside of HBAS. The name just refers to the concept of an App Store.

Unzip the "appstore" folder from the zip at the above download link. This is the bundled HBAS app. Place this folder inside the /apps/wiiu/ folder on your SD card. After this, run HBL and select it from the menu.

Once the app launches, press A or touch the screen to dismiss the splash screen. You can scroll with either stick, the D-pad or the touch screen. To download an app, touch its icon and choose "GET".

The app bundle provided above features http://wiiubru.com/appstore as the default repository, courtesy of pwsincd . The apps featured there are hosted on his server.

Duplicates of apps from my sd - HBAS tries to figure out which apps you have installed by going by the app's folder name. You can safely ignore this, or delete your local copy. Update was a downgrade - Upgrading relies on the repository maintainer to keep the version numbers up to date. Since versions don't have to be numbers, the update check is != rather than > Crashed with white text on black text! - report a photo of what your screen looks like and how you got it Seems to have froze - describe what you were doing when it froze, and were you able to scroll still or was it truly frozen? No apps are listed, only local ones - This happens when the server can't be reached. Tubehax dns may be down, or your repo may be down. HBL/HBAS won't load anymore! - One of the apps got corrupted, redo your SD card to contain only a fresh HBL Button enlarged, but no window opened - Pressing the buttons waits for the server to respond, so it may respond once fully the download is complete.

For the images and music, they must be png and mp3 respectively. For repository.txt, it should be a file that contains only the desired repository url, no newlines or anything.

There's no real need to self-host your own HBAS repo, but if you're interested you can check out the web folder. Inside there's a python script that can assist in building a directory, which can then be hosted locally or on a server.

The HBAS binary currently expects a /directory.yaml file, and then a /apps/ folder, which contains HBL-compatible apps folder (like sd:/wiiu/apps/). You can setup the directory.yaml file without using the python script, but the script makes it easier. Once your have your server setup, you will need to create repository.txt on your SD card to point HBAS to it (see Customization).

See the issues page on github: https://github.com/vgmoose/hbas/issues In short, the following things are planned: - smoother scrolling - permissions for apps - multiple repo management - json instead of yaml for the directory - handle corrupt apps/icons

Contribute to any of the above are welcome, check out the code and help out! It would be much appreciated.

pwsincd - Helped design the web interface brienj - Provided many, many development tips and help dimok - The HBAS code is based off HBL directly, as well as making heavy use of his custom libraries.

QuarkTheAwesome - Development help, as well as their exception handler CreeperMario - Porting over some old apps to HBL format Dylon99 - Participated in "extreme" beta testing Marionumber1 - For reluctantly being a 5.5.x enabler

The in-app music is Scream Pictures by (T-T)b.

Homebrew App Store is licensed under the GPL3 license, so it can be freely modified and used as long as the source remains public. Scream Pictures is copyright (T-T)b and is not to be distributed or used outside of an official HBAS binary.

This app is open source and free to distribute because the users (yes you!) deserve it.